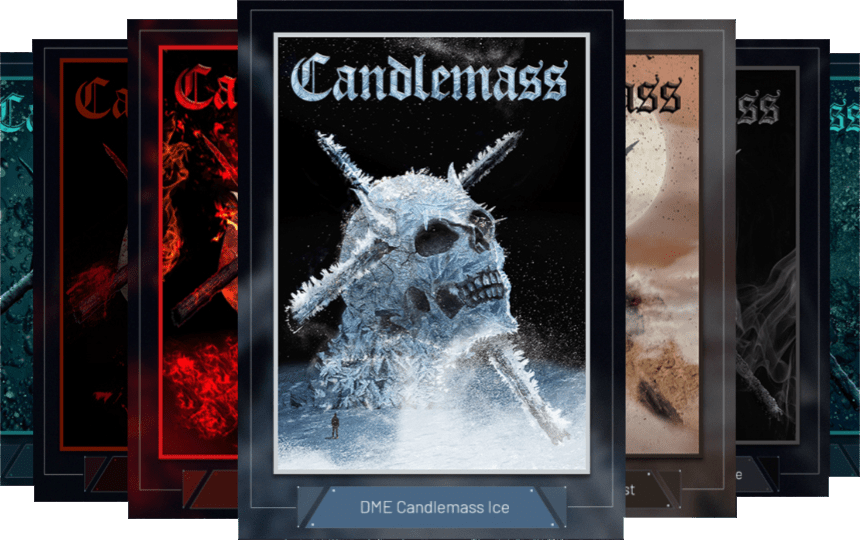 Introducing the DME (Digital Multimedia Experience): The beginning of the future for music and art!

As the digital revolution rages on with undiminished force, the music business moves on and tries to find new ways forward as well. As the sales of physical music started to decline when streaming took over, the record companies and the bands lost a big part of their income. Since then, live performances and various merchandise has been pretty much the only way to earn money from the music.

Then suddenly came a little thing called an NFT (Non -Fungible Token). A unique ID attached to a piece of art, and now it became possible to sell unique digital artwork online. So instead of buying say a limited lithograph of a cool painting, you could buy (and own) a digital one instead. Just like with crypto currencies, you could now collect and invest in a digital way.

Sounds like fun? Well, we believe that there is so much more to it than that, so we have taken it one step further.

We use three keywords to describe the DME:

So what is a DME really? Well, it is based on the NFT idea. You buy a digital product. Let’s say there are 100 copies of it. Your DME gets a unique ID and it’s recorded on a blockchain (that’s pretty much a database, nothing more fancy than that). A database to verify that there are only 100 of this DME and you own one of them.

What we like to add to the product is the  MULTIMEDIA element. We want to deliver both a unique piece of artwork and unique music from your favorite artists.

So just as you can collect physical vinyl records, posters, t-shirts etc, you can now also collect unique digital music and art, not available anywhere else!

Now you can sit back and relax, looking and listening to your DME. OR, you could put it up for sale, for let’s say $40. Maybe the demand is higher than the availability and you have earned $20.

We believe that this will be a new way for musicians to earn some money from their hard work.

Making unique collectable music and art, only sold as a DME. Not being available on normal streaming services.

We start with the legends of doom: Candlemass!

Our first DME release will be six different artworks of the original Candlemass skull logo. Attached to every picture is a piece of unique, instrumental music. The 6 segments are written by Leif Edling and were recorded in October 2021 and each one has a playing time between 40 and 45 seconds. They will only be available via this DME. We are talking super heavy riffs with the characteristic Candlemass  signature sound.

Candlemass was formed by Leif Edling, a true Black Sabbath fan and one of Sweden’s top songwriters in his field.

Their 1986 debut “Epicus Doomicus Metallicus” followed by the trilogy of “Nightfall” (1987), “Ancient Dreams” (1988) and “Tales of Creation” (1989) are all considered absolute classics of the genre today.

After a bumpy road with numerous member changes, eventually original vocalist Johan Längquist returned to the band. It resulted in the album “The Door to Doom”, a fantastic comeback released by Napalm Records on February 22nd, 2019. Tony Iommi from Black Sabbath, the Lord of metal riffs himself, guested on the song “Astorolus – The Great Octopus” and in 2020 they were Grammy nominated for best metal act.

Candlemass is back stronger than ever.

The Skull and Cross logo are not only synonymous with the band, but also for the whole genre.

In Leif Edling’s own words:

I created the first version of the logo back in the early NEMESIS days. It was very simple, but it had the skull and those spikes through it. When I think about it, I just might have done it for a Motorhead t-shirt competition the fan club held in the early 80’s. Today, more than 40 years later, I can’t really remember what came first – the Nemesis logo or the competition skull? The hen or the egg, hahaha! I didn’t win of course.

Over the years, I improved it a couple of times, until my drummer, Matz Ekströms father, finally took my rather rudimentary design and made it 10 times better. When I first saw it back in 1986, I couldn’t believe my eyes. It was incredible. The Candlemass skull logo had been born! Today when I see it in metal magazines and on album covers and t-shirts, it still gives me chills down the spine!

These unique DME versions of the original logo have been re-created by artwork masters Carlos & David from Easy Rabbit.

PrevPrevious
NextNext
We use cookies on our website to give you the most relevant experience by remembering your preferences and repeat visits. By clicking “Accept”, you consent to the use of ALL the cookies.
Cookie settingsACCEPT
Manage consent